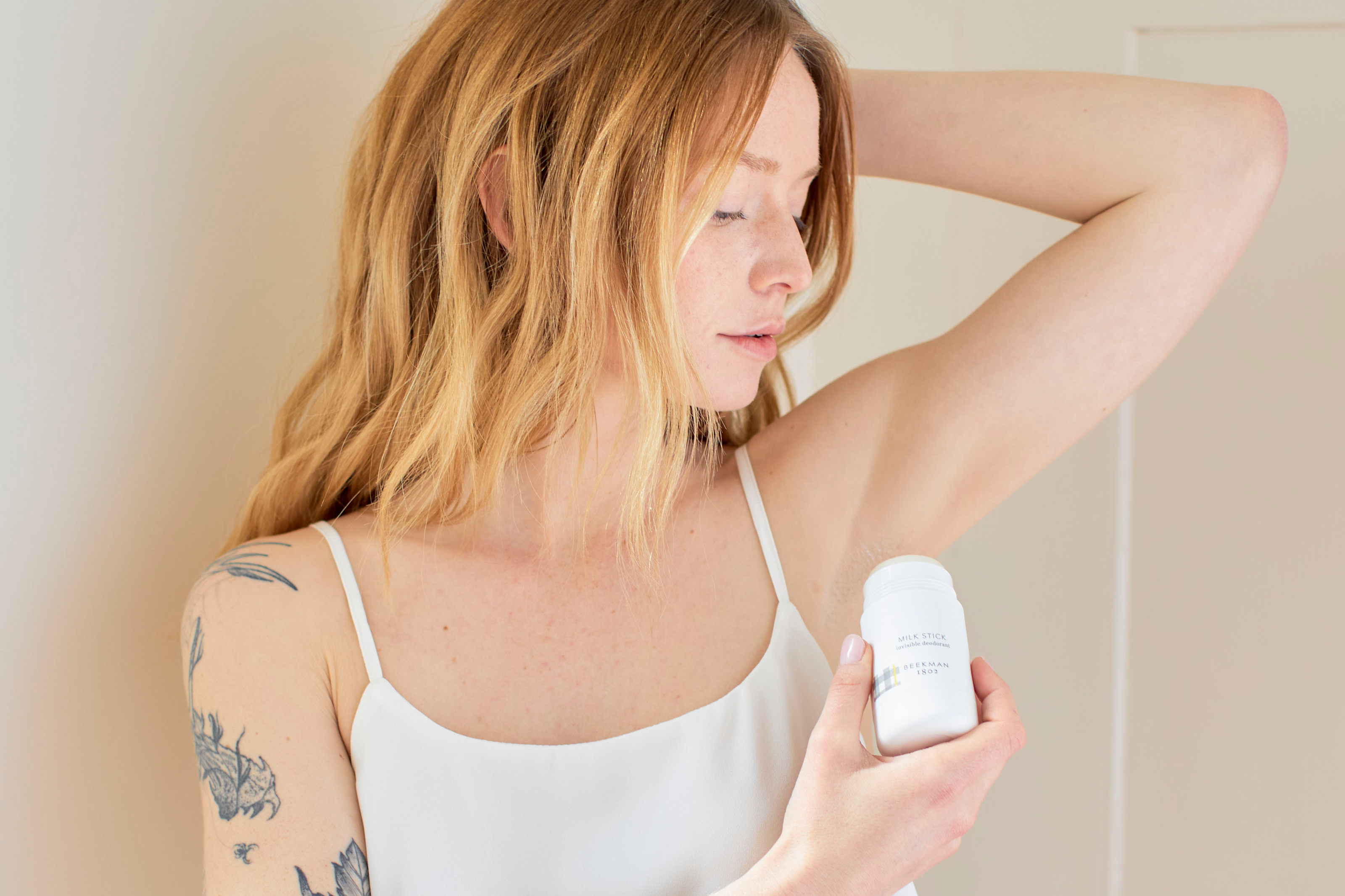 Our bodies are well made. They are strong and resilient. They let us feel and see and hear what is all around us. And sometimes...they smell.

Skin is the body’s protection from the outside world. Part of its job is detoxification, and when it does its job right, the byproduct can be a little wet and odorous. Common instinct is to find a powerful chemical antiperspirant to stop the process. But, for many reasons, that’s not such a great idea. A mix of aluminum (the active ingredient in antiperspirant) and other chemicals is not a good thing to rub onto the very soft, permeable underarm skin.

Since you wouldn’t put anything so harsh on your face, there’s no reason why it would be okay to put it on other parts of your body. How about some gentle powdered goat milk instead? That’s the base of our new Milk Stick Invisible Deodorant, and it soothes the delicate skin under your arms and keeps you cool throughout the day. There’s also rosemary leaf extract, geranium and lavender oils, and all kinds of other star botanicals that smell amazing and get the job done really well.

Lots of us want to switch from an antiperspirant to a natural deodorant, but there’s this much-talked-about transition period where you sweat and smell more during the changeover. It’s the main reason people don’t think natural deodorant works. But we challenge you to make the switch and stick with it.

Our natural deodorant is one that truly works, and we promise it’ll be worth it. This will be good for you in the long run, and Milk Stick Invisible Deodorant will be there for you every step of the way. With 100% natural botanical oils, silky smooth texture and crisp, citron scent, Milk Stick promises less smelliness, less wetness, all goodness. You’ll see.

But first, the transition. Here’s everything you need to know about switching from antiperspirant to natural deodorant.

Why is natural deodorant better than aluminum antiperspirant? What happens when you switch?

Antiperspirants feature aluminum because it clogs up the pores in your underarms to keep them from getting wet. Which seems like a good idea in the short term. But according to a paper published by researchers at the North Carolina Museum of Natural Sciences’ Genomics & Microbiology Lab, antiperspirant use alters the armpit biomes, making their bacterial communities more species-rich. When you use an antiperspirant, you are actually making matters worse in terms of what is actually causing odor — the bacteria, not the sweat. According to the same paper, there is a period of transition where the body rebounds from antiperspirant use, causing an increase in odor-causing bacteria under the arms. But most people who use natural deodorant say they sweat and stink less after it’s over. In the long run, it seems, natural is better.

When is a good time to switch to natural deodorant?

If, for a while, you went out in the world a little smellier than usual, people would forgive you and still want you around. So any time is a good time to go natural with your deodorant. Even better, if you have an extended period of downtime, a slow season where you don’t have important social and work engagements, that’s ideal. You can make the transition without being super self-conscious about your natural musk.

How long will this take, exactly?

Most people report a transition period of up to 30 days. According to a study conducted through Ghent University in Belgium, that’s about how long it takes for the skin to realize it is no longer under the stress of an antiperspirant, shed, regenerate and return to normal levels of bacteria. On the other side of the transition, there is a lot less wetness and smelliness. Promise.

In smelly detail, how will the switching process unfold?

In the first week, the leftover pore-clogging effects of the antiperspirant will keep things in check and the top layers of the skin will shed. The worst of it will likely occur around the second week when the body begins to flush out the pores with sweat and shed deeper layers of skin. It’s a natural process that releases a lot of what you’ve been holding back with antiperspirant. It’s all coming out now! In week 3, the bacteria colonies under your arms will start balancing out, leading to only mild odor and wetness. By weeks 4 and 5, you’re good. The BO is gone. Natural freshness is here to stay.